after Pisaro2 after Badiou3

END_OF_DOCUMENT_TOKEN_TO_BE_REPLACED

Regarding the Calarts Design School 1970-75…

END_OF_DOCUMENT_TOKEN_TO_BE_REPLACED

When the Socco went into mass production, after several failed attempts, it became the basic model for all bean bag chairs to come. Although unconfirmed, it is rumored that the Socco was actually discovered by accident. This discovery came from a Styrofoam factory that put all the leftover pieces from the production line in a bag. This new fad soon became a very popular item because the Socco was the first chair to move with the person sitting in it.

END_OF_DOCUMENT_TOKEN_TO_BE_REPLACED

In short, no pattern is an isolated entity. Each pattern can exist in the world, only to the extent that is supported by other patterns: the larger pattern in which it is embedded, the patterns of the same size that surround it, and the smaller patterns which are embedded in it it.
This is a fundamental view of the world. It says that when you build a thing you cannot merely build a thing in isolation, but must also repair the world around it, and within it, so that the larger world at that one place becomes more coherent, and more whole; and that the thing which you make takes its place in the web of nature, as you make it.

via A Pattern Language

In what follows we shall try to think about dwelling and building. This thinking about building does not presume to discover architectural ideas, let alone to give rules for building. This venture in thought does not view building as an art or as a technique of construction; rather it traces building back into that domain to which everything that is belongs.

END_OF_DOCUMENT_TOKEN_TO_BE_REPLACED

In 1971 Levrant de Bretteville founded the first design program for women at the California Institute of the Arts, and two years later co-founded both the Woman’s Building, a public center for women’s culture, and its Women’s Graphic Center in Los Angeles. In 1981 she initiated the communication design program at the Otis College of Art and Design.

Alighiero Boetti (also known as Alighiero e Boetti; December 16, 1940 – February 24, 1994) was an Italian conceptual artist, considered to be a member of the art movement Arte Povera. He is most famous for a series of embroidered maps of the world,Mappa, created between 1971 and his death in 1994. Boetti’s work was typified by his notion of ‘twinning’, leading him to add ‘e’ (and) between his names, ‘stimulating a dialectic exchange between these two selves’.

A series of pastel knobs with generally optimistic faces.

Each is ceramic, has a brass insert, and mounts with the included bolt. All are 1-1/2″ in diameter and just over 1″ in height

Arcology is Paolo Soleri’s concept of cities which embody the fusion of architecture with ecology. The arcology concept proposes a highly integrated and compact three-dimensional urban form that is the opposite of urban sprawl with its inherently wasteful consumption of land, energy and time, tending to isolate people from each other and the community. The complexification and miniaturization of the city enables radical conservation of land, energy and resources.

END_OF_DOCUMENT_TOKEN_TO_BE_REPLACED

The whole thing is worth a look, but this is what really got to me…

It is not easy to translate into English the Italian word autoprogettazione. Literally it means auto = self and progettazione = design. But the term ‘self-design’ is misleading since the word “design” to the general public now signifies a series of superficially decorative objects. By the word autoprogettazione Mari means an exercise to be carried out individually to improve one’s personal understanding of the sincerity behind the project. To make this possible you are guided through the archetypal and very simple technique.

Therefore the end product, although usable, is only important because of it educational value.

from Autoprogettazione? by Enzo Mari

Have you ever thought to yourself, ” How would I do it if I had it to do all over again?”  Usually this thought only pops into your head when you are about to die or your life is in ruin or perhaps during a midlife crisis where family and job stress suddenly takes its toll.  This feeling is usually accompanied by mounting debt and an overwhelming feeling of being trapped in the life you have chosen.  Tension in the world, an unstable economy, high fuel prices, and mind numbing popular culture may also add to this feeling of utter futility.

END_OF_DOCUMENT_TOKEN_TO_BE_REPLACED

Marjetica Potrč is an artist and architect based in Ljubljana, Slovenia. Her interdisciplinary practice includes on-site projects, research, architectural case studies, and series of drawings. Her work documents and interprets contemporary architectural practices (in particular, with regard to energy infrastructure and water use) and the ways people live together.

A palapa (a Spanish word of Malayan origin, meaning “pulpous leave”) is an open-sided dwelling with a thatched roof made of dried palm leaves. It is very useful in hot weather and, therefore, very common in Mexican beaches, such as in Acapulco. It is perhaps one of the most important architectural contributions of Philippine culture to Mexican West cultures.

A new city built from scratch in the desert is in general not a viable proposition. Large cities have evolved out of small, ancient cities: the new city must be an intensification of existing cities.

WALKING HOUSE is a modular dwelling system that enables persons to live a peaceful nomadic life, moving slowly through the landscape or cityscape with minimal impact on the environment. It collects energy from its surroundings using solar cells and small windmills. There is a system for collecting rain water and a system for solar heated hot water. A small greenhouse unit can be added to the basic living module, to provide a substantial part of the food needed by the Inhabitants. A composting toilet system allows sewage produced by the inhabitants to be disposed of. A small wood burning stove could be added to provide CO2 neutral heating. WALKING HOUSE forms various sizes of communities or WALKING VILLAGES when more units are added together. WALKING HOUSE is not dependant on existing infrastructure like roads, but moves on all sorts of terrain.

END_OF_DOCUMENT_TOKEN_TO_BE_REPLACED

A HOUSE tour is the highlight of a visit with a proud homeowner, but when one drops in to see Derek Diedricksen, who makes playful micro-shelters out of junk, it is less so. Possibly because the temperature up here on a cold winter day is less so, possibly because his square footage is less so.

At about 24 square feet, the Gypsy Junker, made primarily out of shipping pallets, castoff storm windows and a neighbor’s discarded kitchen cabinets, is the largest of Mr. Diedricksen’s backyard structures. The Hickshaw, a sleeper built on a rolling cedar lounge chair (or as Mr. Diedricksen calls it, “a rickshaw for hicks”), is considerably smaller, at 2 1/2 feet wide by 6 1/2 feet deep. The Boxy Lady, two cubes on a long pallet, is the smallest: 4 feet tall at its highest point.

END_OF_DOCUMENT_TOKEN_TO_BE_REPLACED

You Can Make It Anything You Want END_OF_DOCUMENT_TOKEN_TO_BE_REPLACED

Economy originates with the Greek oikos, meaning dwelling place, and nomos, to distribute. Oikos has the derivatives oikein, to inhabit, and oikoumene, the inhabited world.

The word economy, small e, connotes the flow of goods in an inhabited place, a particular community, informed by the criteria of merit and mercy and true value.

END_OF_DOCUMENT_TOKEN_TO_BE_REPLACED

Crawford argues that the ideologists of the knowledge economy have posited a false dichotomy between knowing and doing. The fact of the matter is that most forms of real knowledge, including self-knowledge, come from the effort to struggle with and master the brute reality of material objects — loosening a bolt without stripping its threads, or backing a semi rig into a loading dock. All these activities, if done well, require knowledge both about the world as it is and about yourself, and your own limitations. They can’t be learned simply by following rules, as a computer does; they require intuitive knowledge that comes from long experience and repeated encounters with difficulty and failure

Let’s be clear: a political generation isn’t just an age group that can be data-mined for a promising trend. It’s a common resolve that things have to change, and that change begins with you, concretely. Somehow, young and not-so-young people from all walks of life need to discover not only the philosophical principles, but also the popular vocabularies, the social contexts, the media, the science, and the aesthetics to articulate a critical, resistant, and constructive ethos that could challenge this total corruption. Which means, not a new conspiracy theory or apocalypse scenario, not a new and probably failed call for protest movements either, but deeper territorial processes of inquiry, formation of collectives and public spaces, experiments in co-education and alternative economies, all at a distance from existing institutions, but with a willingness to form new ones and to push for a transformation in the very idea of what an institution can be (since the existing ones, including the art institutions, are totally corrupt).

END_OF_DOCUMENT_TOKEN_TO_BE_REPLACED

“The problem is that the high creatures are the server mechanisms of the technology and the system they have created, meaning that we’re dictated to as much by cars. We’ve turned the world into a parking lot. Similarly we use musical technology that we create, and it finds a use for itself”

END_OF_DOCUMENT_TOKEN_TO_BE_REPLACED 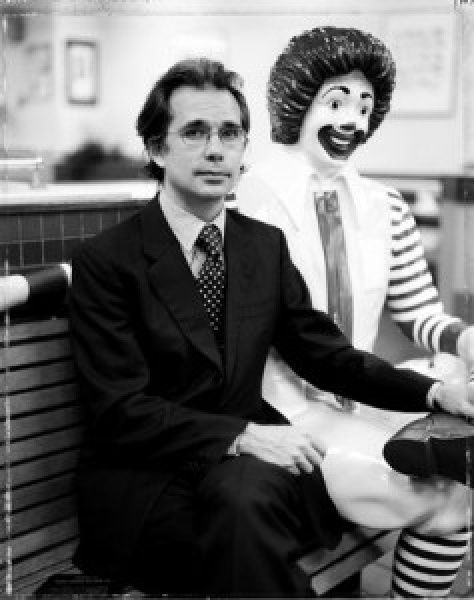 A growing number of artists are abandoning truth-telling political art for a boldly utopian practice, recognizing that political problems can’t be solved by an atrophied collective imagination. With examples ranging from Thomas More’s 16th-century tome Utopia to the Yes Men’s recent “special edition” of the New York Times, Stephen Duncombe explores the creative terrain within this new world of dreampolitik. Duncombe is an associate professor with the Gallatin School at New York University.

A to Z GRANTWRITING MONTHLY ARTS AND EDUCATION NEWSLETTER
February 2011

They are powered only by the wind and even store some of the wind’s energy in plastic bottle ‘stomachs’ to be used when there is no wind.

Stuart Brand’s concept of a building’s “shearing layers” that suggest a single building is changing at various speeds all at once.

What would be necessary to transform “design” into a discipline of un-disciplinary moves and motions, into a practice of possibility and an articulation of becoming?

END_OF_DOCUMENT_TOKEN_TO_BE_REPLACED

Many people construct their own Rietveld furniture in the evening-hours. Apparently these designs are an invitation to do so…

END_OF_DOCUMENT_TOKEN_TO_BE_REPLACED

I am here to perform an autopsy.

Autopsies begin with these words.

Translated from Latin, this means: “This is the place where death rejoices to teach those who live.”

I tremble at them, because this is not an easy speech for me to give.

I know in my mind that to forego the examination of death is to fail to honor the dead. But all I can think about right now is my love for what environmentalism was.

Nobody enjoys an autopsy, and yet its value to life is indisputable.

The word “autopsy” means to “see for yourself.” An autopsy is the key tool that doctors use to determine whether their diagnosis was correct, and to see if the treatment was effective. In the past, autopsies were common — in the 1950s, 50 percent of deaths had autopsies performed. Today, that number is barely 10 percent.

We will perform an autopsy tonight. We will question our diagnosis of the problem and prescribe a new treatment.

With fond memories, a heavy heart and a desire for progress, I say to you tonight that … Environmentalism is dead.

END_OF_DOCUMENT_TOKEN_TO_BE_REPLACED

Left to his own devices he couldn’t build a toaster. He could just about make a sandwhich and that was it.

END_OF_DOCUMENT_TOKEN_TO_BE_REPLACED

The Plywood House is built on the foundation of a house that burned to the ground the year prior. The construction budget is based on the limited fire insurance settlement. Standard wood frame construction is sheathed with off-the-shelf 4’-0” x 8’-0” plywood panels, stained gray and pre-cut to receive stock windows. The facade is the product of interference between a serial strategy of exterior cladding and specific demands of the interior program.